Home Mind & Brain Motion Sickness On A Board 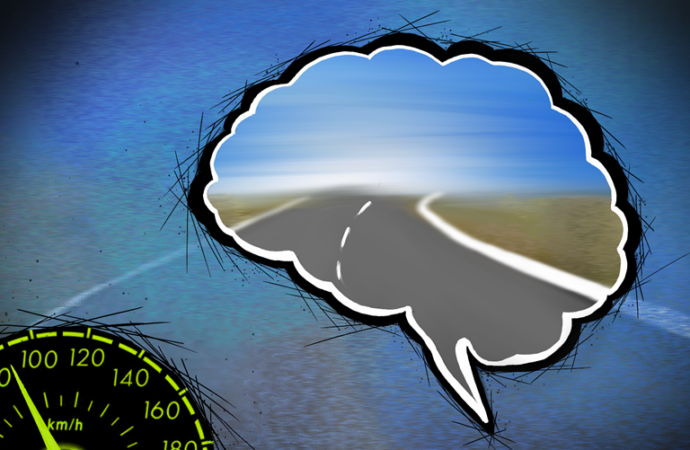 The Industrial Revolution changed our lifestyle. It made it possible to cross long distances faster than ever before. However, some people did not fully adapt to the new ways of travelling.

What is going on?

Travelling has never been easier. But, for some of us, being a passenger can be a nightmare.

When we sit in a car, and it suddenly accelerates or turns, our eyes follow that motion, our body moves in the way as the vehicle we are in, and our muscles feel the pressure and vibration of the movement. Simultaneously, the brain tries to understand the motion, not only through the vision and muscles’ signals but also on the middle ear, an organ that acts as a body position detector.

So, eyes see movement, muscles detect vibrations, while the inner ear says that we keep balanced. The senses conflict.

What is motion sickness?

Kinetosis, or motion sickness as this condition is generally known, is a disturbance of the inner ear than mostly affects children and women. Fatigue, nausea, vomiting, dizziness, headache, and general malaise are the most prevalent symptoms.

How does motion sickness look from a scientific point of view? The moment a journey begins, our brain receives contradictory stimuli – on the one hand, we sit still, on the other, we move. There is a discrepancy between the vehicle’s real motion during travel and the movement that our body performs. As a result, the brain gets confused.

The body reacts in the same way as it does with alcohol poisoning: many unpleasant symptoms, including consciousness disorders, appear. These are typical defence mechanisms – the body is defending itself with neurological centres that produce chemical message carriers called neurotransmitters. These molecules send signals to other control centres, which results, among other things, in vomiting.

Every person exposed to appropriate movement, which provokes the body to react, can suffer from motion sickness.

However, it is difficult to predict who will develop symptoms: it all depends on individual stimulation thresholds. Some people will experience the disease even on short journeys, while others will feel no discomfort.

What can you do?

The travel disease itself is most likely an evolutionary problem: the human brain is not adapted to this product of civilization’s progress. After all, the beginning of the passenger cars’ era dates to only the 19th century.

Getting the body used to travel should make the disease disappear over time or become less bothersome. In fact, this method will work in some cases, but not for everyone. So, what to do to alleviate its symptoms and survive subsequent journeys?

We can counteract it by requesting a window seat, looking out the window in aeroplanes or trains, or sitting in the vehicle’s front seat. On ships, we can go up on deck and focus on the horizon. Try to avoid reading while travelling and, if possible, try to get some fresh air. If it does not help, try to close your eyes, take a deep breath, and relax.

Motion sickness may have many faces. The most common one is car sickness that we may struggle with while being a passenger, or, more rarely, a car driver. Sharp tilts and low visibility of the way while flying can cause air sickness. Seasickness is even worse due to the continuous rocking movement. Some people may struggle with it even when standing on the pier: the water moves around, and the brain may feel motion despite that we stay.

What about hiking? Unfortunately, some of us may also feel uncomfortable while standing on the hill, looking up in the sky during windy and cloudy days. The brain recognizes the movement of the surroundings while the body stays balanced. So, once again, an error occurs.

Very similar space sickness affects astronauts that are exposed to zero gravity. That form of their adaptation to weightlessness once in orbit is space adaptation syndrome (SAS). Are there more types of motion sickness? The answer is yes.

Recent progress in the gaming industry made immersive technology like Virtual Reality (VR) very popular. Did you know that some people suffer from motion sickness while playing a game with VR goggles? The movements that we perform while playing do not correlate with the electronic equipment’s image to our eyes. In reality, we stand or sit, while in-game, we continuously change the body’s position. So, the brain might feel poisoned as well as like during travel by vehicle.

Motion sickness is a psychological and physiological body response to the motion caused by a disturbance in the inner ear. It frequently causes dizziness, sweating, nausea, and vomiting. If you struggle with this condition, better get some fresh air during travel, or try to close your eyes and relax.

This article is a joint work of Weronika Urbańska (Department of Environmental Engineering, Wrocław University of Science and Technology), Agnieszka Pręgowska (Institute of Fundamental Technological Research, Polish Academy of Sciences), and Magdalena Osial (Faculty of Chemistry, University of Warsaw) as a part of the Science Embassy project.