Home History of Science Galileo’s legendary tower of Pisa experiment was actually done by a Dutch... 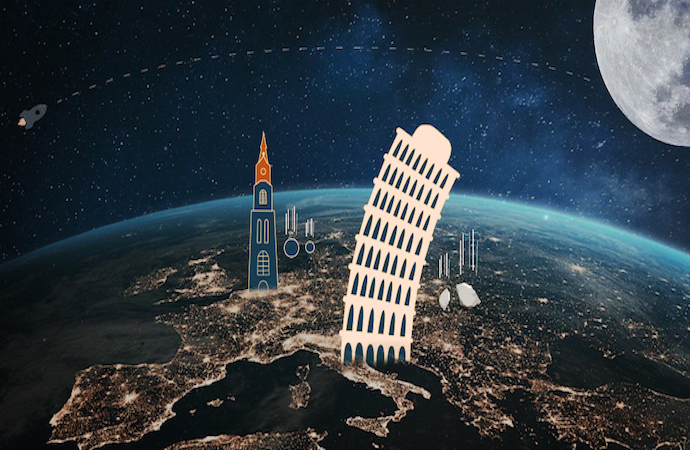 According to a popular legend, during the XVII century, Galileo Galilei threw stones of different sizes and materials from the leaning tower of Pisa to demonstrate how falling objects behave. However, no evidence supports that anecdote.

What did Galileo actually do to come up with his brilliant ideas about movement?

Galileo instructed his craftsmen to build a long wooden bar with a highly polished channel. His helpers tilted the bar, dropping lead and cork spheres down the canal to measure the time they took to slide from one point to another.

Galileo left a written record of several of his experiments in his work Dialogues on Two New Sciences (1638). He used the voice of three curious characters: Salviati, Sagredo, and Simplicio, who passionately discussed situations —supporting or refuting Aristotle’s conclusions, formulating theorems, and describing experiments — giving rise to multiple observations of the natural world.

“A piece of wooden molding or scantling, about 12 cubits long, half a cubit wide, and three finger-breadths thick, was taken. On its edge, a channel was cut a little more than one finger in breadth. Having made this groove very straight, smooth, and polished as possible, we rolled through it a perfectly round bronze ball. Having placed this board in a sloping position, we rolled the ball. We repeated this experiment more than once to measure the time with an accuracy such that the deviation between two observations never exceeded one-tenth of a pulse-beat.“

From these observations, he concluded that bodies under natural acceleration (the name Galileo gave to gravity) behave in the same way, regardless of their weight or stuff.

Galileo had an extraordinary imagination, crucial for scientific progress. He wrote about impossible situations where the atmosphere disappeared, objects were ideally spherical, and surfaces were polished to perfection.

He envisioned such fantastic scenes and linked them with his experiments and observations. From this combination emerged his principle of inertia: a body moving in a straight line, with constant speed, will keep moving perpetually.

The history of physics has crucial moments, and this is one of them. Galileo’s principles were decisive in understanding gravity. They paved the way for Newton’s universal laws of mechanics.

Was the falling objects experiment ever done?

The answer is yes. That experiment did take place, not in Pisa, but in the Netherlands, in Delft.

It was performed by the Flemish mathematician, engineer, and mill builder Simon Stevin and Jan Cornets de Groot, the mayor of Delft. They took two lead spheres, one ten times heavier than the other, and let them fall at the same time from the tower of the Nieuwe Kerk church.

Stevin described the experiment and their observations in his book De Beghinselen der Weeghconst (The Principles of Statics), published in 1586.

“Let us take, as the highly educated and diligent researcher of the mysteries of nature Jan Cornets de Groot and I did, two lead balls, one ten times heavier than the other and let them fall together from 30 feet high. That will show that the light ball does not take longer to fall than the heavy one, but they fall together at the same time. This proves that Aristotle was wrong.“

For Aristotle, the speed of a body in free fall was proportional to its mass. Until that moment, the principles of movement proposed by him were taken as true. They were taught in academic centers such as the University of Pisa and the University of Padua.

Dethroning Aristotle was a challenging task. He was undoubtedly a genius: his ideas prevailed for centuries, and many are still valid. Even Galileo, Stevin, and de Groot’s experiments were not good enough to present a general principle for the falling things.

For their principle to stand firmly, scientists needed to prove that the atmosphere was the cause for things like feathers, paper, and other objects disobeying them.

However, technology sooner or later came to the rescue. Today, we use vacuum chambers to get rid of the air or even repeat Stevin and de Groot’s experiment on the Moon to check that they were right.

Spectacular test on the Moon

In 1971, Apollo 15 astronaut David Scott descended from their spacecraft on the Moon with a hawk feather and hammer in his hands.

While he was being filmed by his partner, he simultaneously dropped both: the feather and the hammer. In the video below, you can see how the two objects fall simultaneously to the lunar soil, causing Commander Scott to burst into glee. “How about that?” he exclaimed.

In another breathtaking experiment, physicist Brian Cox set up the falling bodies experiment in the largest vacuum chamber ever built. The vacuum is achieved by pumping thirty tons of air out of the huge room.

Laboratory technicians raise a handful of feathers and a bowling ball to the ceiling of the chamber. When the vacuum is complete, the bowling ball and feathers are released simultaneously, and voilà —they all fall perfectly in unison.

Peter Asenbaum and collaborators at Stanford University launched clouds of different isotopes of rubidium atoms in a tube nine meters high under a vacuum. Isotopes are elements with the same amount of protons but different amounts of neutrons, making the difference in mass.

With this experiment, they corroborate once again Galileo-Steven-de Groot principle of falling objects.

Today, we know from Einstein that free-falling objects behave that way because gravity disappears for them. But this is a subject for another time.

Citizen Science or How to Make Science Accessible to All

Robots, the next generation of soccer players