Home Science and the city Science as street art in Leiden 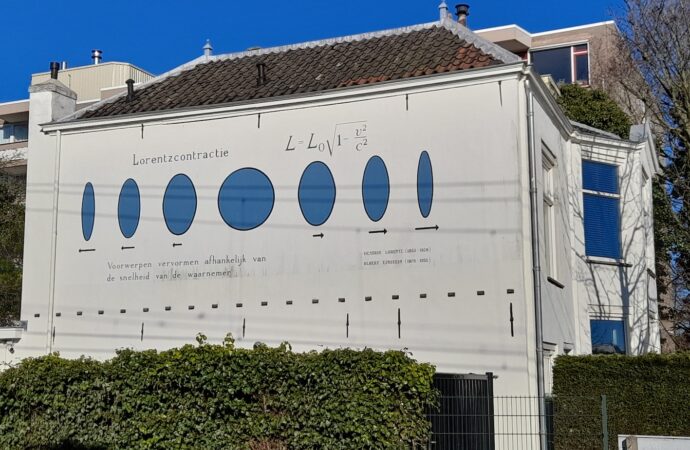 Have you ever walked through a poetry book? This is what you will experience visiting Leiden. More than a hundred murals with poems compose the literary route, created in 1992 by the Tegenbeeld (Contrast) foundation, in response to traditional urban art centered on pictures. Each piece has been written in the author’s language, including Japanese, Russian, Arabic, Hebrew, Mandarin, Catalan, and 33 others.

In 2018, Ivo van Vulpen and Sense Jan de Molen suggested adding another language to the Leiden wall poems project: math; the language of the Universe, as Galileo claimed.

Loving the idea, Tegenbeeld Foundation designed and painted eight breakthrough physics formulas on the city walls, whose authors worked or studied at the University of Leiden. Each of these equations tells a story of nature. Let’s hike through them.

A living work of art

Between 1901 and 1913, five Dutch scientists received the Nobel Prize. One of them was Hendrik Lorentz (1902), a leading contributor to special relativity. Lorentz is so famous among scientists that the University of Leiden created an institute in his name. Two of his findings are shown on Leiden walls.

The formula located at the corner of the Groenesteeg and the Hooigracht describes how electric and magnetic fields affect electric-charged particles. While the electric field (E) accelerates the particle in a straight line, the magnetic field (B) deflects it. This is called: Lorentz force.

The shrinking effect in special relativity

The second Lorentz’s formula on Leiden walls describes the length contraction of a stationary object observed by a traveler. And vice versa: a stationary observer will see a traveling object shrink.

To illustrate, picture a soccer ball on a pillar. A traveler passing by will see it deformed like a rugby ball in the direction of its movement, as it was sketched under the equation.

Why don’t we see anything deformed while going in our cars? The effect is noticeable when the traveler moves close to the speed of light. For this reason, it is imperceptible in our daily lives. Still, it is frequently observed in big particle accelerators and cosmic ray detectors.

This formula was crucial for the development of Einstein’s special relativity.

Lorentz was a professor at the University of Leiden and a member of the Academy of Sciences and Arts of the Kingdom of the Netherlands. So brilliant he was that after a conference in 1927, Einstein called him: “a living work of art.”

Christiaan Huygens (1629 – 1695) was one of the most important scientists in history: He came up with a breakthrough description of light as waves, explained Saturn’s rings, spotted its moon Titan for the first time, and observed features of Mars’ surface, among other discoveries.

In 1637, Huygens showed that to calculate the period of a pendulum—how many swings it makes per minute— we do not need to know its mass; it is enough to know how high it is pending. This discovery boosted the knowledge to build clocks.

Galaxies rotating in a strange way

In the 70s, American astronomer Vera Rubin observed, astonished, that the Andromeda galaxy was rotating wrongly, challenging both Newton’s and Einstein’s gravity theories. The stars at the spiral’s arms moved as fast as the stars near the center of the galaxy. According to the physics known, the stuff far from the center of a galaxy should be moving much slower —unless astronomers add invisible mass to the calculations: dark matter.

Jan Oort’s formula on Witte Singel 58 C helps astronomers calculate how stars rotate with respect to the galaxy center since no accepted gravity theory works. Jan Oort was an astronomy professor in Leiden.

Gravity according to Einstein

Albert Einstein was an extraordinary professor at the University of Leiden, visiting it frequently to collaborate with his colleagues. In honor of his genius and close friendship with Lorentz, the Lange Sint Agnietenstraat Street mural exhibits his famous General Relativity equation.

This equation tells us that massive objects deform space and time around them. Consequently, any celestial body bends the light, and, if it is massive enough, for example, a galaxy, behaves like a lens, focusing on the light coming from a star behind it. This phenomenon is depicted in the drawing above the formula.

After a hundred years of being published, Einstein’s theory of gravity continues to produce successes. Among the latest: the discovery of gravitational waves. We use general relativity every day, for example, when orient ourselves with a GPS.

A quantum feature of matter

Amidst the strange results in experiments that gave rise to the quantum revolution in the first half of the XX century, physicists struggled to describe atoms’ behavior in a magnetic field.

Samuel Goudsmit and George Uhlenbeck solved the problem by introducing an electrons’ intrinsic property: the spin. The spin became crucial to explain the atomic structure and subatomic particle interactions. Although the spin can only be seen at a subatomic level, it explains many macroscopic phenomena like magnetism in iron, nickel, and cobalt, or the behavior of superfluid helium4.

Atoms feeling each other

In gases, as the pressure increases, so does the temperature, and their volume shrink. So says a handy formula. But that statement assumes gases are made out of sizeless dots that do not “see” each other. Despite its simplicity, it works well in many situations. However, considering that atoms and molecules do occupy space and “feel” each other may be crucial.

Johannes Diderik van der Waals (1837-1923)  introduced these facts in his equation showcased in Fruinlaan 18. His findings helped explain water vapor condensation. Van der Waals was a student at Leiden University and proposed his equation in his Ph.D. thesis.

On how light bends

When the light goes from a substance into another, it appears to be bent. You can see it looking at a straw in a glass of water. This phenomenon, called “refraction,” occurs because light travels at different speeds in different substances. The slower the light in a substance, the smaller the angle.

In the XVII century, scientists didn’t know about the speed of light. Even so, Willebrord Snel van Royen (1580 –1626) came up with a general expression describing refraction: Snell’s law.

This formula is located at the intersection of the Sint Jorissteeg and the Hooigracht. Snel van Royen, also known as Snellius, was a mathematics professor at the University of Leiden.

Street art is not to be understood but to enjoy. Vulpen and de Molen showed that physics could also decorate the city even though non-scientists may not fully understand its meaning.

No doubt, the formulas blend beautifully among Leiden’s poems. After all, quoting biologist Richard Dawkins: Science is the poetry of reality.