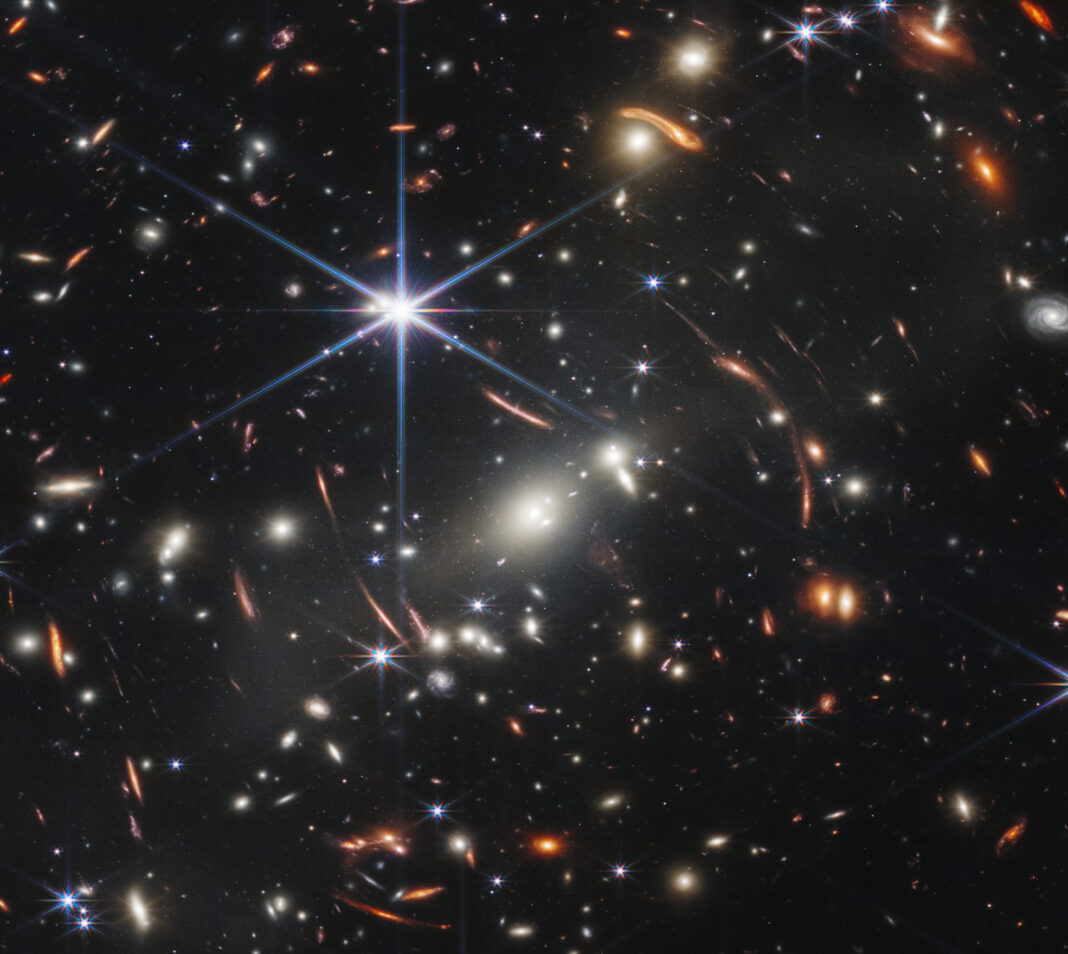 In the beginning—about 400,000 years after the Big Bang— darkness was upon the face of the deep. The light was trapped inside the neutral atoms and molecules, mostly hydrogen, helium, and a pinch of lithium. By the end of the Cosmic Dark Ages, a few hundred million years later, those hydrogen clouds eventually gathered and gravitationally collapsed, forming the first stars and galaxies. Nuclear reactions kicked off inside those infant stars, creating the first heavier elements ever, allowing the light to escape—the very same light the James Webb Space Telescope captured in its deep field image unveiled on July 11.

The endless richness of the deep field image, jam-packed with stars and galaxies, covering a tiny patch of sky, tells the history of the universe.
The blue biggest and brightest objects with large spikes are stars that are close to us, in the Milkyway. These spikes are not actually part of the star, but an effect due to the sharp edges of the honeycomb mirror. These patterns only appear in the stars, not in the galaxies because stars are “point sources, while galaxies are extended objects,” clarified Macarena García Marin, ESA operations scientist and team leader of the mid-infrared (MIRI) instrument at the Space Telescope Science Institute in Baltimore.

Most of the objects in the image are galaxies, thousands and thousands of them, from the white, big ones, in the center, to the very faint points in the background, many of them captured for the first time by Webb. Macarena expressed her amazement:

“I didn’t expect to see so many galaxies. We can see galaxies in every Webb image, which is wonderful; particularly in the case of MIRI [mid-infrared instrument], in its deep field, I was surprised by the colors. There are galaxies in every color. The first time I saw it, I said, Wow! all those colors, incredible. Those colors tell us the age of the galaxies. The image shows galaxies from many moments of the universe, very old galaxies, intermediate galaxies, and the central cluster.”

How do colors help scientists determine the age of a galaxy?

When light interacts with matter and we decompose it in its colors, it creates unique patterns called spectra, which are fingerprints of atoms and molecules, allowing scientists to identify elements and chemical compounds no matter where they are in the universe. The spectra reveal stars’ and galaxies’ composition.

However, the ancient light that comes from the galaxies reaches us with its wavelength stretched to the infrared due to the expansion of space-time. Thus, the spectra will appear red-shifted while preserving their shapes, allowing the scientist to calculate the age of the galaxies.

For this reason, the James Webb carries four highly sensitive instruments that can observe infrared radiation, between 0.5 microns and 28.5 microns; that is, from near-infrared to mid-infrared, surpassing the capacities of the Hubble and Spitzer telescopes.

Although Spitzer is a fine space telescope whose instruments detect light in the far infrared (between 3 microns and 160 microns), Webb has much more resolution and sensitivity. “Is like having a small magnifying glass and a big magnifying glass,” Macarena explained.

The oldest galaxy ever spotted

Among the first ancient galaxies analyzed, one of them already broke the record of the oldest found so far. “It is already confirmed that at least one of those galaxies is 13.1 billion years old. The first studies of the deep field will concentrate on identifying the kind of galaxies and their ages.”

As light travels through the cosmos, it gets deviated and bent by every massive object it encounters in its journey. When an object is massive or the combined mass of many objects is big enough, it becomes a gravitational lens acting as a cosmic magnifying glass. This feature of matter and light helps us observe very distant and faint objects behind the massive objects. Galaxy clusters are the most massive and powerful gravitational lenses in the universe.

For the first Webb deep field, the researchers focused on the SMACS0723 galaxy cluster: the white brightest galaxies in the center of the image. It is located near the constellation Volans (The flying fish) in the southern sky. The cluster appeared 4.6 billion years ago, about the time our solar system was formed.

We’ve barely begun to savor the power of the Webb. Astronomers started to enjoy tons of data that will help unravel many mysteries of the cosmos such as the emergence of life, dark matter, and dark energy. They will investigate our neighboring giant gas planets and their watery moons, habitable exoplanets, violent events such as colliding galaxies or blackholes eating neutron stars, and the first stars that created the first heavy elements for the first rocky planets.

Unquestionably, the James Webb Space Telescope is a success that will usher in a new era of knowledge.

The scientist interviewed: Macarena Garcia Marin, ESA operators scientists and leader of the Webb mid-infrared (MIRI) instrument at the Space Telescope Science Institute in Baltimore.  She has been working for James Webb since 2008 and at ESA since 2015.

Spacetalks 3.0 —Towards an Inclusive Outer Space