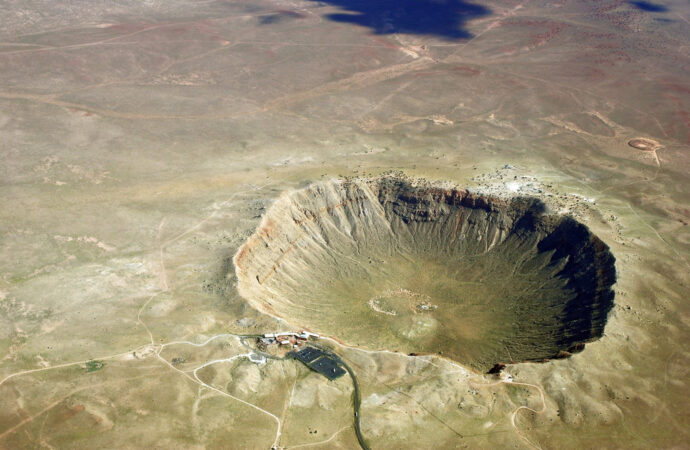 An alien iron rock the size of the Arc of Triumph strikes the atmosphere. Traveling much faster than the sound it turns into a fireball and slams the Earth’s surface. The blast is as furious as a nuclear bomb. In an instant, loads of soil spew high in the air, the extreme heat melts the rocks raining back into the ground, flora and fauna vaporize at ground zero, the shockwave flattens the trees hundreds of square kilometers around. This spectacular event occurred 50.000 years ago, leaving a round scar of 1.3 kilometers. Now, the Barringer Crater can be visited in Arizona, USA.

Thousands of tiny meteorites hit the surface of the Earth each year. Most of them remain unnoticed; big meteors are rare. However, those that survive the caustic passage through our atmosphere potentially threaten life. Many scientists have correlated significant geology or climate changes and catastrophic events, like mass extinctions, with bolide impacts.

The best-known example is the dinosaur killer asteroid that shocked Chicxulub, Mexico, about 65 million years ago terminating the Cretaceous-Paleogene era —giving a chance to the mammals and, later, the humans to dominate.

Leaving no trace behind

After a significant meteorite hits our planet, the evidence of the impact spreads all over the place. However, the Earth is alive, it is made out of molten rocks with a moving crust on top, tectonic plates colliding, volcanoes erupting, and lava becoming ocean floor. Weathering and resurfacing prevent the preservation of most craters. All this restlessness erases the evidence of very old impacts.

For planetary scientists, the number, size, shape, and composition of the expelled material of meteorite impact craters tell the history of celestial bodies.

Because the Moon has been evolving together with the Earth for billions of years, meteorite bombardments affect both simultaneously. The Earth is a bigger target than the Moon, and it is certainly more attractive for cosmic bodies, gravitationally speaking. Nevertheless, the Moon suffers much less erosion than the Earth. The geology of its surface is practically an account of meteorite fall.

Looking at the moon to understand our planet

In Japan, a research group led by professor Kentaro Terada, Osaka University, investigates the formation and age of 59 large craters on the Moon using data from the Kaguya satellite. In a recent study published in Nature, they showed that meteoroid showers bombarded the Earth-Moon system approximately 800 million years ago, right before the onset of the first known glacial period — a moment of significant climate and biological changes. Geologists believe that the entire planet turned into an iceball for about 85 million years. They named this period the Cryogenian.

The team found that several craters should have formed simultaneously. They remarked that their most important finding, which is the key to the novel discovery, is that eight craters bigger than twenty kilometers showed identical ages.

Professor Kentaro Terada and collaborators estimated that at least ten trillion tons of extraterrestrial rocks, 30 to 60 times more than the Chicxulub impact, hit the Earth at that moment. They suggested that the vast amount of space material they estimated to have entered the Earth 800 million years ago may have triggered some of the significant changes in climate and life, giving way to new species, in the Cryogenian period.

When gazing at the Moon, think that all those whimsical silhouettes you see may help us understand the history of our planet.