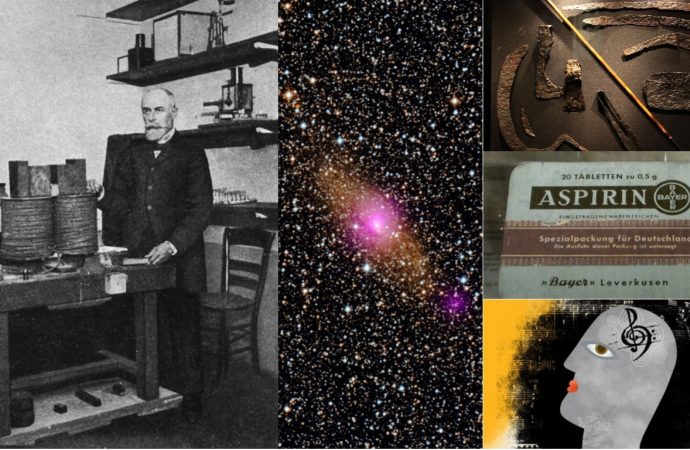 More than one hundred years later, Becquerel’s accidental discovery of spontaneous radioactivity still intrigued our readers; it was our most-viewed story of this year.
In UA Magazine’s most-read articles of 2017, there is also room for black holes and photons, Viking music, aspirin and the musicians’ brain.

1. The Discovery of Radioactivity – That Time the Sun Didn’t Shine In Paris
Becquerel wanted to prove that sunlight makes minerals emit X-rays. He placed two uranium crystals in a photographic plate, wrapped them in black paper and stored them in a drawer, waiting for the sun to shine so he could test his hypothesis. But that was a grey February in Paris and the plated stood in the dark for several days. And so the discovery of spontaneous radioactivity began. Read more.

2. A Way To Entangle Photons, Naturally?
As for so-called “spinning black holes,” X-ray photons created within these accretion disks may become entangled according to the direction and speed of the disk’s rotation.  In such an entangled state, particles lose their individual quantum states and instead adopt the states created by the black hole’s warping of spacetime. Read more.

3. What Did Viking Music Sound Like?
The Germanic Scandinavians of the Viking Age (c. 793-1066) did not leave any written records of their music. But does this mean that they did not have music? By studying archaeological records, literary accounts, and medieval music theories, it is possible to sketch the outlines of Vikings’ music. Read more.

4. The Amazing Brains of Musicians
Musical training is unique regarding its breadth and permeation throughout the nervous system. To master music demands way more than listening: to perceive, and especially produce, music requires that the musician processes and integrates information from the auditory, visual, somatosensory, and motor domains, all at the same time. Read more.

5. The Real Wonder Drug: How Aspirin Came into Being
“In 1941 there stood in […] the German Museum in Munich a showcase filled with white crystals, with the inscription, ‘Aspirin: inventors Dreser and Hoffmann.’ Dreser had nothing to do with the discovery, and Hoffmann carried out my chemical instructions without knowing the aim of the work. […]. But, at the main entrance to the museum there hung a large sign which forbade non-Aryans from entering this institute! Those who understand will read between the lines.” Read more.