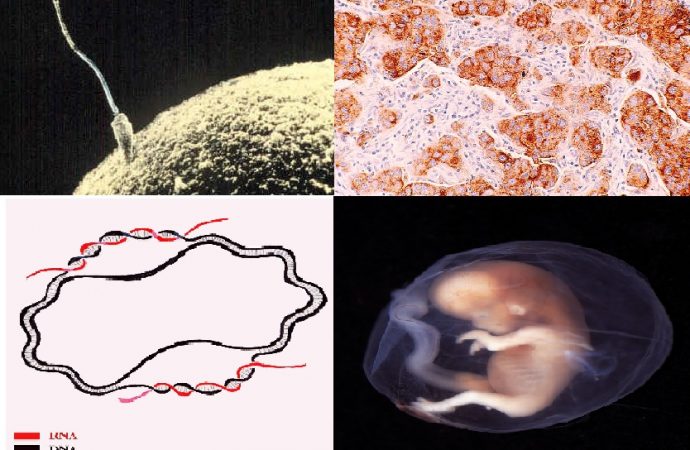 Using highly-precise microscopic techniques and mathematical formulas, researchers from the University of York, Birmingham, have investigated the sperm’s movement towards fertilizing an egg. The sperm’s tail creates a propulsion movement that pulls the head and the body backward and sideways in a coordinated manner.
Investigators expect to use this study’s findings to interpret how large sperm groups behave and interact and hope to get new insights into male infertility treatments.

“[…] to achieve locomotion sperm stirs the fluid around in a very coordinated way, not too dissimilar to the way in which magnetic fields are formed around magnets.”

2. Cancer: the balance between bad luck and lifestyle

Lifestyle factors, random errors and parental heritage are usually credited as the main responsible for the origin of cancer. US researchers sat down to investigate the mechanisms behind the appearance of the disease and tried to settled the conflict regarding the role of the genetic errors and the personal behavior when it comes to cancer.
This was a follow-up study from 2015, a highly controversial study which was largely misinterpreted as “most cancers are bad luck”. Researchers combined evidence from genome-wide sequencing and population-wide databases. The data showed that, despite a large amount of research that points out the role of random DNA damage, many cancers are still preventable. For instance, around 90% of lung cancers worldwide could be avoided through changes in the lifestyle.
Read the full story here (NewScientist).
Read the original paper here. (Science).

3. Microbes evolved in parallel with the colonization of the human body

Our analysis gives us a window into how different bacteria adapt and evolve so that we can more effectively predict which implanted species will survive to make an impact on disease.”

4. Understanding how the placenta evolved to figure out the complex organs in vertebrates.

Among the complex organs present in vertebrates, Gunther Wagner and Oliver Griffith decided to focus on the one that has more recently evolved: the placenta.
The first vertebrates did not possess placentas and laid eggs on the outside. In more recent vertebrates, however, the female started to hold their eggs inside their uterus, thus originating the placenta, through repurposing existing tissues (when embryonic tissues come into contact with a parental tissue during development). In addition, embryonic membranes started to produce hormones that made possible the communication between the fetus and the mother.

If a mutation results in tissues developing alongside each other in a new way, then the signaling dynamics inside these tissues are likely to affect each other’s development. [..] We think the placenta is just one example of this phenomenon in action. This path may be a general way in which new organs arise in animals.

5. Circular RNA is, after all, equipped with a protein-coding capability

Circular RNA was thought to be, for a long time, non-coding material. But researchers at the Hebrew University of Jerusalem have found that this type of molecule holds the protein-coding ability. Investigators found that circRNA is bound to ribosomes – the machinery that translates RNAs into proteins – and they were able to identify the proteins produce by this type of RNA.
CircRNAs are mostly abundant in brain cells, more specifically in the synapses, the places where the impulses pass from one cell to another. This discovery might shed some light on the gene activity in the brain and on neurodegenerative diseases.

[…] the circRNAs translate mainly in the brain, likely in synapses. This is a very important, promising and timely discovery that gives an important hint of the function of these abundant yet uncharacterized RNAs. These findings are very important also due to the possible involvement of circRNAs in brain-related diseases.”