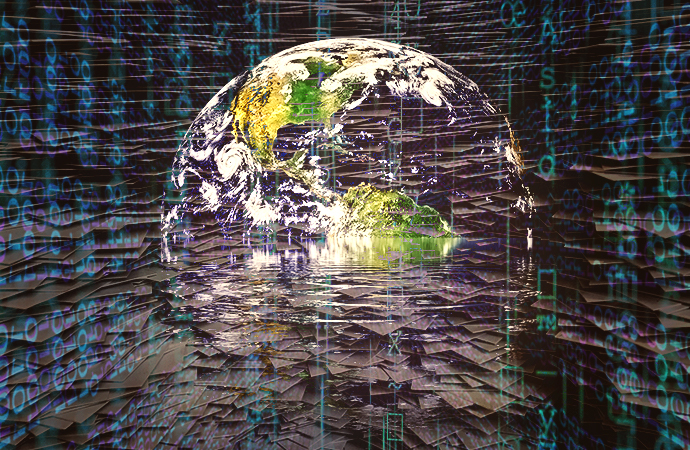 We have entered the 21st century flooded by a vast sea of scientific literature: our Zeitgeist is to read and understand—daily—hundreds of scientific results; definitely a superhuman task. For this reason, machines are scientists’ best helpers: the posthuman era is here.

To assess how the climate is changing and the impact of climate change, climatologists need to consult hundreds of thousands of peer-reviewed research papers spanning a wide range of disciplines—glaciology, biology, sea-level studies, geology, atmospheric studies, agricultural science… you name it.

In a study published this week in Nature-Climate Change, Max Callaghan from the Mercator Research Institute on Global Commons and Climate Change in Berlin, Germany, and collaborators mapped 102,160 studies specifically dealing with human-attributable climate change trends. The scientists chose two main variable trends: temperature and precipitation, to study their impact on the population worldwide.

Callaghan and collaborators combined climate model simulations and observed data sets in publications about temperature from 1951 to 2018 and precipitation from 1951 to 2016 to identify trends attributable to humans.

They found robust evidence of anthropogenic climate change impact on 48% of the global land areas, hosting 74% of the global population. These areas are located mainly in western Europe, North America, and South and East Asia. In the other places, where only 11% of the population resides, they reported little evidence—although not negligible—in the existing literature about how temperature and precipitation trends impact the environment.

Based on their artificial intelligence models, they inferred that human-influenced climate change affects 80% of the populated areas—where 85% of the population lives.

Significant gap in quantity of evidence among regions and income brackets

Callaghan and collaborators used an artificial intelligence program to classify the scientific articles published since 1951 according to the noticeable impact, such as that on coastal systems, glaciers, and rivers.

The lesson is clear: we need to pay more attention to low-income communities, gather more measurements and evidence, and produce more studies.

Computational calculations are the new “mathematical machinery”, resembling when Leibniz and Newton created calculus and used it to understand nature. This is our brave new world, where the amount of scientific literature is pushing the limits of manual scrutiny; where intelligent machines are becoming researchers’ allies, assessing topics as complex as climate change.

Despite the “attribution gap” in evidence, this new survey, using machines to read the papers, only reinforces what we already know: anthropogenic climate change needs our attention.