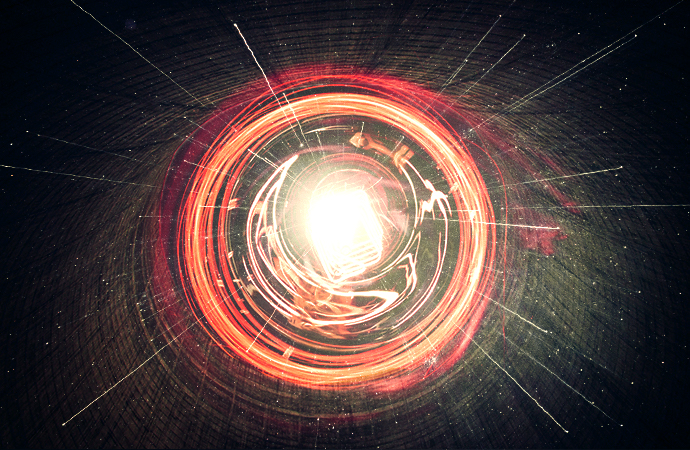 “It is not often that a scientist gets the chance to work on a project that will change the world.”

If we could dive towards the center of the Sun, across hundreds of thousands of kilometers of dense blazing hot hydrogen gas, we could reach the birth of light—powered by the most violent chemical reaction in the universe: nuclear fusion.

In our Sun, and in many other stars, the leading nuclear reaction occurs between two hydrogen atom nuclei, which are simply 2 protons, that merge to form a new helium nucleus. But how does the Sun convince protons, which electrically repel each other, to merge? The answer is gravity.

In a nebula, the immense gravity due to the massive amount of dust and hydrogen collapses under its own weight to create a star. Under these extreme conditions, protons get to smash into each other until they feel the nuclear force and fuse into helium. About 5 million tons of gas participate in billions of reactions to transform matter in the heat and light that we feel and see from home.

Nuclear fusion as a homemade source of energy

Since nuclear fusion was discovered 80 years ago, it has turned into the holy grail of energy. Of course, 80 years is a long time. And, yes, fusion is hard, but we need it badly. Nuclear fusion represents atomic power without nuclear waste and zero carbon dioxide emissions. It would be the ultimate solution to provide energy and mitigate climate change. For these reasons, scientists are determined to make it work in the lab, hoping to harness its power for our consumption.

The good news is that a lot of progress has been made. Despite the COVID19 crisis last winter, the Joint European Torus (JET) experiment, a prototype that contributes to the 35-nation collaboration ITER, started conducting promising nuclear fusion experiments with noticeable progress.

ITER is the largest nuclear fusion project in the world. The members—scientists from the USA to the EU, Russia, India, Korea, Japan, and China—strive to build and operate a commercially feasible device in the Saint-Paul-lez-Durance province in France.

But how do we reproduce, here on Earth, the conditions to create our own star for our energy supply? Well, we can’t have the gravity of a dense nebula. Still, we can use heat and magnets to make the hydrogen nuclei slam into each other until they fuse. Before I give you the recipe, I will tell you why nuclear fusion is the holy grail of energy.

The most efficient energy we can produce comes from nuclear reactions. However, the atomic energy that we use today comes from breaking radioactive atom nuclei. That process requires mining uranium and creates highly toxic waste.

Despite the security regulations and well-known engineering procedures to make the plants reliable and deal with radioactive waste, we know that a small error can still cause a huge disaster. We have seen this in Mile Island, Chernobyl, and Fukushima. This remains the truth in spite of nuclear energy being so far the best option to mitigate climate change.

Nuclear fusion, instead, not only produces a tremendous amount of energy, but is clean and the primary materials it needs are right there: in the ocean.

Then, we heat our mixture to over hundreds of millions of degrees Celsius. The immense temperatures rip off the electrons from the atoms, and only plasma is left behind: a gas of electrically charged roaming particles. The high heat also makes the particles move around its container like crazy. But do not worry: a giant magnet will get them under control.

Under these conditions, the hydrogen, deuterium, and tritium nuclei slam into each other until some finally feel the nuclear force and stay together as helium nuclei. Millions of these reactions every second release the expected energy—the same produced in the Sun.

The history of commercial nuclear fusion energy has been long, but was worth it. It has been 100 years since physicists started to realize how atoms work. Since 1939, they have known that nuclear fusion of hydrogen into helium fuels the Sun. Hans Bethe, a former Manhattan Project scientist, won the Nobel Prize in Physics in 1967 for this amazing discovery.

In the 50s, British scientists were working on an unsuccessful nuclear fusion experiment called ZETA. In parallel, the Russians invented a fusion machine they named tokamak, or a  toroidal chamber with magnetic coils. It was the peak of the Cold War when the Soviets claimed that their tokamak generated 10 times more heat than any other fusion experiment in the world.

Politically, it was unthinkable for the Western European scientists to access such an experiment behind the iron curtain and corroborate the success of the Russians. But knowledge has nothing to do with frontiers and politics: scientists use their own ethical criteria to collaborate whenever they can.

In 1968, Bas Pease, director of The Culham Centre for Fusion Energy, and Lev Artsimovich, director of the Kurchatov Institute in Moscow, organized a visit by five British scientists to the Russian fusion lab. The British team took their own equipment to independently measure the temperature generated by the tokamak.

Mike Forrest, one of the visiting British scientists, narrates how they needed to travel by Pakistan Airlines and how the Soviet scientists made them feel at home amidst the political crises.

After 6 months, the British succeeded in corroborating that the Russians were right about their breakthrough invention. Bas Pease passed the news on to the US fusion scientist, making this knowledge globally available.

The tokamak is the technology scientists still use today to produce nuclear fusion. So, where is the problem? Why is the world still waiting for such clean atomic commercial plants?

Scientists use numbers, and here the magic number is the gain factor “Q,” which is the ratio between the power produced and the heat required. It is the bookkeeping quantity: it keeps a tab on how much energy is used and how much is gained.

If Q is less than 1, bad news: fusion is still not viable as an energy source. If Q is greater than 1, good news! The fusion is starting to be efficient.

For decades, it was challenging to achieve a Q greater than 1.

Scientists strive to make ITER a commercial size nuclear fusion device designed to generate a Q higher than 10 by 2050. In other words, they hope to produce 500 megawatts of output using 50 megawatts of electricity.

Since some experiments began in the UK, Brexit has created unnecessary problems and delays. The UK was not in the agreement as a separate country. Luckily, the UK and the EU managed to sign agreements to maintain the UK’s participation.

The US team has already finished constructing the giant magnet that will be soon delivered to France and will operate in the ITER tokamak.

This summer, the JET experiment will focus on adding more shots of tritium and deuterium to the mix. The hope is to produce enough heat to sustain further fusion reactions.

If everything works as planned, the ITER device will begin operations in 2025.

Beyond the excitement of the news from ITER and JET experiments, we should focus on the progress made. Scientists are closer than ever to creating the ultimate clean energy source on the European soil.