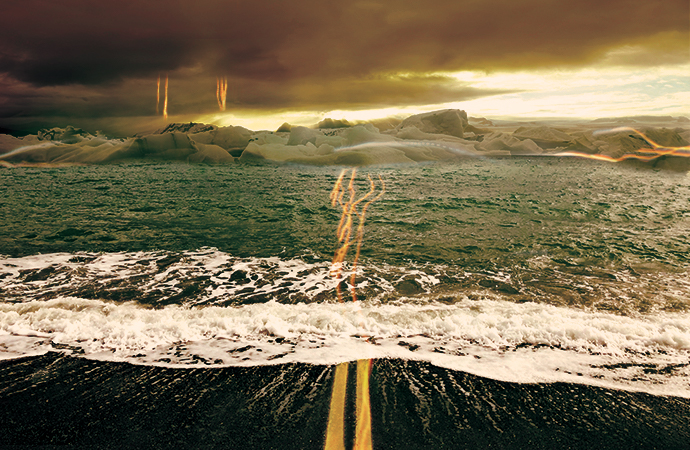 Tobblie Effowe, a Togo resident, has seen his house consumed by the sea. He lived close to a once touristic beach that lost its shape, coconuts’ trees, and charm due to the sea level rise. This situation has severely affected the economy in the region. According to the World Bank, dozens of villages have been destroyed on the African west coast due to the rising tides and coastal erosion.

But where did all this water suddenly come from? Multiple manifestations of climate change are responsible. One of them is the expansion of the water as it warms up, but the major contributor is the melting of glaciers and ice sheets.

The Greenland ice sheet is the second largest in the world after Antarctica. Together, they make up 99% of the freshwater ice on Earth. Its mass reduction substantially impacts the global sea level and ocean currents.

In a recent study published on the 17th of May in the Proceedings of the National Academy of Sciences, Niklas Boersa and Martin Rypdale, from the Free University of Berlin and The Arctic University of Norway, analyzed specific changes in the behavior of the Greenland glacier. According to their calculations, the central-western ice sheet loss is closer to a tipping point than previously estimated.

Scientists forecast the total loss of Greenland Ice Sheet ice by 3000 AD. That would cause more than 7 meters sea level rise, triggering the collapse of the Atlantic system of surface and deep ocean currents —key for the stability of the Earth’s climate.

Greenland has been warming 2 ºC in summer and 5 ºC in winter, above pre-industrial levels, since the 90s. The ice mass loss from 1992 to 2017 was over 3900 billion tonnes, contributing to a rise of the sea level of over 10 milliliters (almost half an inch).

For a glacier, melting in itself is not a problem because ice accumulates again, recovering lost layers. Experts localize the frontier between snow accumulation and ice erosion zones and calculate its annual average height or equilibrium line altitude.

The stability of this frontier is investigated for long periods. If the equilibrium line altitude falls, scientists say that the ice sheet is declining. Once a tipping point is crossed, ice retreatment turns irreversible, causing a rapid and substantial glacier depletion.

Scientists strive to predict the tipping point by looking into the early warning signs by simulating the ice loss dynamics. Boersa and Rypdale collected data drilling deep into the Greenland ice, extracting cores to read the glacier’s history. These studies helped them construct models to calculate the ice loss rate and the temperature at which the tipping point could be reached.

Models defining the early warning signs have helped predict glacier disappearance, the onset of epileptic seizures in humans, and the crashes in the financial markets, among other complex phenomena.

One of the leading early warning signs of the irreversible ice loss in a glacier is the slowing down of the snow recovery, together with a large deviation between seasons. This indicates the approach of the tipping point.

Boersa and Rypdale found that the process driving the instability of the equilibrium line altitude is a cycle by which melting decreases the ice sheet height, exposing the surface to the warmer temperatures that accelerate melting. “Our results suggest substantially enhanced melting in the near future,” the authors remarked in their article.

How much time do we have to act?

For both Greenland and Antarctica, tipping points exist for warming levels that could be reached before the end of this century. Boersa and Rypdale urged climate researchers to further investigate the early warning signs of the Greenland ice sheet loss and reflect:

The time scale strongly depends on the future CO2 emissions and how much temperatures will rise beyond the critical temperature.

Predicting the tipping points will help us understand how to address climate change mitigation and help weak economies suffering areas like Togo in West Coast Africa. Even if some ice is recovered, to preserve our patrimony and civilization, humanity needs to be prepared for the inevitable rise of the sea.