Home Design & Technology The next revolution in satellite data exploitation, after GPS and weather forecast 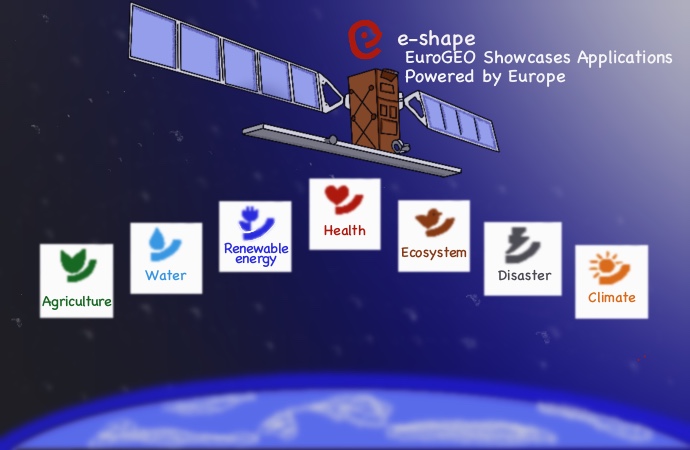 In recent years, data from satellites has brought a bona fide revolution to our daily lives: from checking the weather on your smartphone to the satellite navigation in the car suggesting the best way to avoid congestion on your way to work. Now, scientists and engineers from the European Group on Earth Observations are developing the project e-shape that will expand this revolution into many more areas of life. This international project sees the involvement of several research partners in the European Union.

The benefits of Earth Observation data

E-shape is developing several approaches to applying Earth Observation data to a veritable host of different sectors: agriculture, health, ecosystems, energy, water, and disasters. One of the main e-shape lines of research is surveillance of mercury pollution, tackled specifically by Pilot 2.1. Its aim is to support the Minamata Convention on mercury and create tools to evaluate the effectiveness of mercury pollution reduction policies. This will protect people’s lives, health, and well-being.

From the sky to our daily lives

Consider, whether you are buying a new house or choosing where to send your children to school, you want to be sure that they have not been built on contaminated land. Right now, this information is not readily available, short of paying for an expensive survey. Thanks to e-shape it will be possible to launch a smartphone app to check if you should be looking at another area because mercury leeches in the water from an industrial plant nearby.

Or if you are a firefighter or a policymaker, and you need data about the potential of a specific area for bushfires or floods. Or you work for a public authority, and you are worried that an old landfill could be slowly leaching mercury or other pollutants into the soil. The potential applications and numbers of end-users are huge.

The relevance of mercury pollution monitoring

Mercury or quicksilver, as it used to be called, as pretty as it can actually be really bad news. Although mercury is fascinating, and has been used for years, it is hazardous. It is a neurotoxin very persistent in the environment. It has become a pollutant of global concern due to its potential impact on human health and the environment. Once released into the atmosphere from several man-made and natural sources, it deposits to oceans and terrestrial ecosystems. This affects the food chain and ultimately human health, especially considering its propensity to bioaccumulate in biota – including humans.

Methylmercury, in particular, the most toxic form of mercury, accumulates in fish and reaches humans through the food chain, causing serious diseases. It is toxic to the nervous, digestive, and immune systems; as well as to the lungs, kidneys, skin, and eyes, compromising cognitive, and/or sensory functions and motor skills. It is also possible for mercury to cross the placenta and produce irreversible damage to a fetus.

How all this data will be made accessible?

The objective of e-shape is to free vast amounts of satellite data now “locked” in the servers of research institutes and public authorities. The idea is to build a network of networks, an interrelated system to openly and publicly share all available Earth Observation data (satellite, but also in-situ). Moreover, to build statistical models from these data and make them available to both the general public and the policymakers through a Knowledge Hub.

This web service will assist decision and policymakers in their assessments. For example, evaluating the cost-effectiveness of actions directed to reduce mercury pollution before putting them in place.

As happened with GPS data, any developer will be able to access the data and build, from that, an app or web service. This would provide the basis for an explosion of new services that would become unimaginably intertwined with our daily lives.

The sharing of Earth Observation data

E-shape will lead to a surge in the sharing of information obtained from Earth Observation data. The biggest benefit will most likely be making better-informed decisions regarding essential life choices: where to work, where to study, or where to live. Being better informed also allows the public to participate and contribute to the local debate on governance, local government spending priorities, risk management plans, and contributing to improving the local environment.

For more information, you can check the main project page: https://e-shape.eu and the one specifically related to Pilot 2.1, about mercury pollution monitoring: https://e-shape.eu/index.php/showcases/pilot2-1-eo-based-surveillance-of-mercury-pollution

The e-shape project has received funding from the European Union’s Horizon 2020 research and innovation programme under grant agreement 820852.