Home Archeology Astronomy May Have Influenced Ancient Human Species and Gave Rise to the... 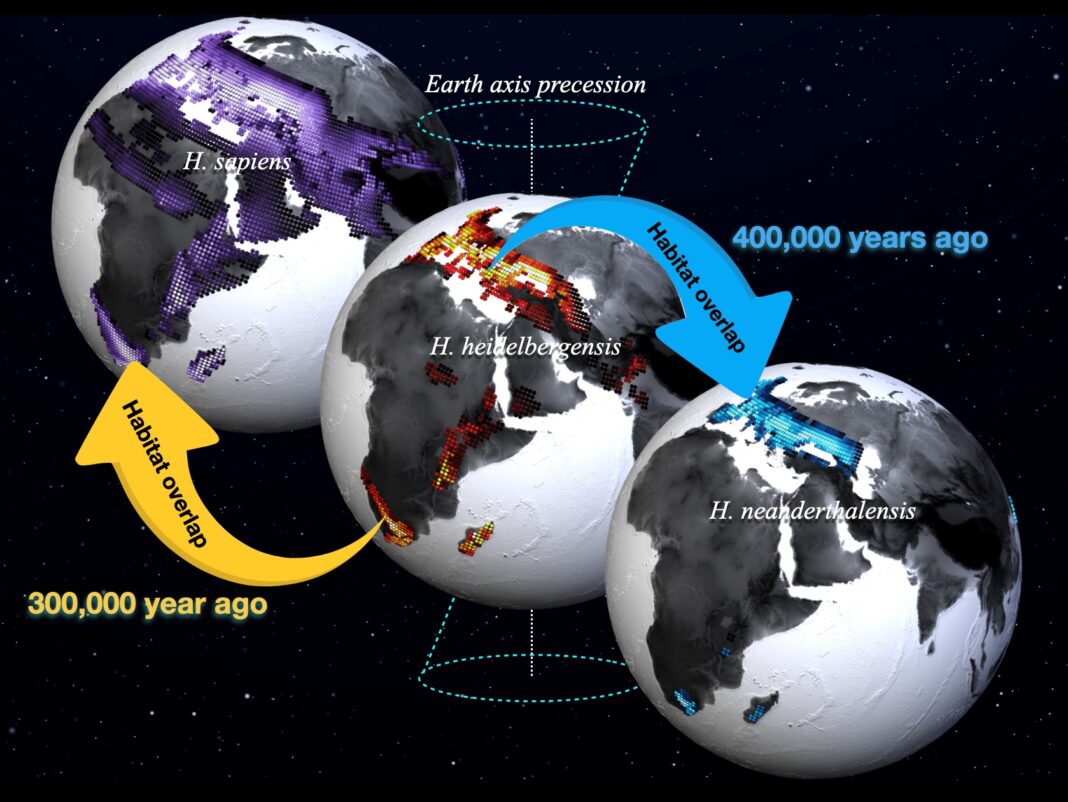 Early humans appeared in Africa about three million years ago. During the Pleistocene Era (from 2.6 million to 11 thousand years ago), major changes in human species occurred: they went from staying in a fixed habitat to becoming global wanderers, adapting to a broad range of climate types and food and water availability.

During that time, the human family tree expanded its branches to member species migrating within Africa and then from Africa to Europe and Asia—that was the moment when our own species, the Homo sapiens, appeared.

But what triggered both: migration and the appearance of the new species?

In an article published this week in Nature (open access), a multidisciplinary team analyzed the relationship between changes in climate with several species of humans’ behavior, migration, and transition between the species. They concluded that past climate shifts, likely astronomically induced, determined the early humans’ habitats, and that the Homo heidelbergensis is the direct ancestor of the Homo sapiens.

Food availability plays an essential role in the survival of a species and it is reliant on climate conditions. To understand the preferences and needs of the human species, Professor Pasquale Raia from the University of Naples Federico II in Italy collected the archaeological and anthropological data (fossils, genetic evidence, and objects) from two million years ago to the present. His dataset includes latitudes and longitudes mainly spanning Africa, Europe, and Asia. Using these data, the team modeled the distribution of the early human species in time, the overlapping of their habitats, and the appearance of the new species.

Meanwhile, Professor Kyung-Sook Yum, from the Center of Climate Physics at the Institute for Basic Science in Busan, South Korea, modeled the climate on the earth for the last three million years. According to the study, this is currently “the longest climate model simulation ever conducted.”

They simulated the response of the climate to astronomical cycles, specifically, Milankovitch cycles, changes observed for atmospheric gases, and the waxing and waning of the northern hemisphere ice sheets. These factors influence the climate in different ways and on different timescales.

They found evidence for the shifts in climate being forced by cycles at astronomical timescales coinciding with the human species migrating along corridors from sub-Saharan Africa to northern Africa, from Africa to the Arabian peninsula, and to Europe and Asia.

“Astronomically forced changes in temperature, rainfall, and terrestrial net primary production had a major impact on the observed distributions of these species,” the scientist stated.

The gravitational influence of the Sun, the Moon, and the giant planets Jupiter and Saturn affects the earth’s orbit and axis of rotation: the shape of the orbit changes from nearly circular to slightly elliptical over a period of 100 thousand years (eccentricity) and its rotation axis varies its tilt in cycles of 41 thousand years (obliquity) and it also wobbles in cycles of 21.7 thousand years (precession).

John Herschel (1792–1871) was the first scientist to hypothesize that the Sun may cause dramatic changes in the climate. The Serbian scientist Milutin Milankovitch, about a hundred years ago, calculated how the Sun’s radiation determines the Earth’s surface temperature. He also studied the climate zones and proposed that a cosmic mechanism may explain the variation of climates across the planet throughout its geological history.

Milankovitch worked on models of climate variations at several northern latitudes, concentrating his studies on the problem of insolation during summer for the past 600 thousand years. Based on his works, he proposed that the different Earth movements—eccentricity, obliquity, and precision—should have dramatic effects on the climate over long periods of time, triggering Ice Ages. The reason is that the amount of sunlight varies at different latitudes with these Earth movements.

The new scientific paper reports that human habitat suitability varied at timescales of 20 to 100 thousand years, corresponding to astronomical cycles of the Earth’s precession and eccentricity.

“This celestial clockwork determines how much solar radiation our planet receives on every point in the globe. It creates the Ice Ages and wet or dry conditions,” said Alex Timmermann, a scientist from the Center for Climate Physics, Institute for Basic Science, Busan, South Korea, and the main author of the article. He remarked that these cycles “determine where and when different human species lived.”

Where do we come from?

Timmermann et al. also dared to answer a fundamental question: Where and which species do we come from? They assumed that the transition from one species to another should have occurred in overlapping habitats. Their archaeological and anthropological data tell our story.

Two million years ago, human species’ habitats were concentrated in particular regions. With the appearance of the Homo heidelbergensis (800 thousand to 160 thousand years ago), everything changed dramatically. This group split into two branches 650 thousand years ago: one branch migrated from Southern Africa to Central Africa and the other to Europe.

Evidence on their overlapping habitats shows that the Homo heidelbergensis branch in Europe gave rise to the Denisovans and the Neanderthals, while the branch in Africa transitioned to the Homo sapiens about 400 thousand years ago, “likely facilitated by massive astronomically generated climate anomalies, which may have occurred during these times and may have caused genetic bottlenecks and subsequent genetic drift and speciation.”

This report and other research show that cycles of celestial bodies influence the behavior and nature of human species. We are connected to the cosmos in many ways, and science is the tool to show us how.