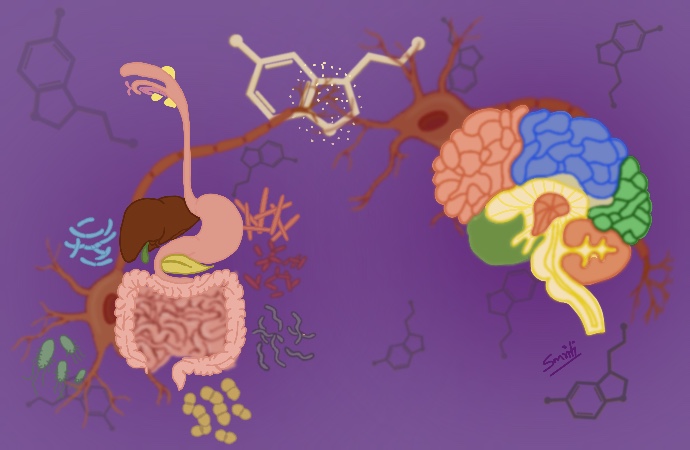 We are not alone, and we don’t need to search further away on another planet. An entire community of microorganisms live inside our gut, interacting and communicating with our brain.

When you have a “gut feeling” or experience “butterflies” in your stomach, you might have received signals from your gut. Scientists call the source of these signals “second brain” and the crosstalk between the gut and the central nervous system the “gut-brain axis.”

What is this gut-brain axis all about?

Scientists identify two key elements in the second brain: the nerves around the gut receiving signals from the brain and the gut, and the other element is the microbiota, a complex community of different species of bacteria living in our intestines.

How do these gut bacteria communicate with our central nervous system?

Several studies in mice, flies, and later in humans revealed that gut bacterial communities can release small molecules called neurotransmitters. These neurotransmitters released into the bloodstream can reach the central nervous system affecting our behavior and mood.

Most serotonin (90-95%), “the happiness hormone,” is produced in our gut. Researchers have found a link between gut germs and anxiety in mice. Germ-free mice showed anxiety-like behavior like they explore less open areas than mice with a normal microbiota. These “anxious” mice showed lower serotonin levels in the brain, highlighting the relevance of the microbiota in behavior.

Other studies revealed changes in dopamine, “the hormone of passion,” associated with memory, learning, and emotions in germ-free rodents.

Where does this microbiota come from?

The first colonization of the microbiota starts at birth. Inside the uterus, the gut is almost sterile, with fewer microorganisms than the adult gut. When the baby passes through the birth canal, it is exposed to its mother’s microbes. This first encounter establishes the child’s microbiota signature and, therefore, the adult’s.

Little harmless inhabitants that manipulate us

The ecosystem in our guts comprises 100 billion microorganisms. Around ten times more than cells in our body! This diversity is influenced by our mode of birth delivery, age, eating habits, genetics, lifestyle, and health. They help us digest food, reduce inflammation, and play a fundamental role in the development and function of our immune system.

But is it possible that the microscopic guests inside our gut change our mood and cause diseases? Disruptions in the original composition of the microbiome have been associated with an increased prevalence of digestive problems, allergies, autoimmune diseases, and psychiatric disorders like depression. In the last 15 years, an increasing number of publications have revealed differences in the composition of these communities in people suffering from diseases like Alzheimer’s, schizophrenia, and autism compared with healthy people.

Increasing evidence shows a strong link between mental diseases and microbiota disorders. In patients with Multiple sclerosis, Alzheimer’s, and Parkinson’s disease, researchers have found that the composition of the microbiota is different from people with none of these conditions. Specific molecules produced by the bacteria and involved in the disease were found in the bloodstream of these patients. These findings link gut microbiota’s health with the predisposition to developing neurological disorders. Therapies involving the restoration of a normal bacteria community in the gut can treat these disorders.

In irritable bowel syndrome, for example, changes in the composition of the intestinal microbiota have been reported. These changes can affect the whole diversity (the different species of bacteria) or only some groups. An increment of “pathogenic bacteria,” like Escherichia and Klebsiella, or the absence of “good bacteria” like Lactobacillus and Bifidobacterium, can also be the cause of abnormalities in the microbiota.

Gut bacteria can make us fat

Disturbances in the communication between the microbiota and the host can disrupt the barrier that protects the gut. This barrier is a physical shield formed of two layers of cells that protect us from pathogens entering our blood —spreading to the rest of the body.

Malfunctions in this barrier increase fat storage and insulin resistance that can later trigger obesity and diabetes.

Diet appears to play a significant role in shaping the microbiota. Having a healthy gut is very important to achieve overall health. Low ingestion of fiber, fruit, and vegetables is one of the common ways to disrupt it. The abuse of antibiotics can also be detrimental for the microbiota since they kill bacteria without distinguishing between good and bad bacteria. A proper diet ensures the right equilibrium of gut bacteria.

In the last decade, gut health started to be relevant for nutrition and products like probiotics and prebiotics. Probiotics are beneficial living bacteria found in certain foods and supplements, while prebiotics are food for these bacteria that comes mainly from carbs.

Since most of the studies used animals like mice, further research in humans is still needed. However, it’s evident that a healthy gut is correlated with our mental and overall health.